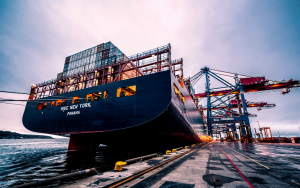 The future of shipping

Shipping is intrinsically-linked to economic growth. It is driven by global demand and acts as a facilitator for new trading opportunities and growth.

According to figures published by the United Nations Conference on Trade and Development (UNCTAD), the average annual growth rate of shipping is estimated at around 3.8% between 2018 and 2023.

UNCTAD has identified a set of key trends that are redefining the sector.

80% of the world’s merchandise in volume is handled by ports. An important indicator of how well they work and their ability to attract business is the volume that they handle.

The top 5 ports in terms of volume are: Ningbo-Zhoushan, Shanghai, Singapore, Suzhou and Guangzhou (all in China, except for Singapore)

The top 20 ports in the world currently only include three ports outside of Asia: Hedland (Australia), Rotterdam (Netherlands) and South Louisiana (United States). The latest available figures for regions put Asia at the top of the ranking with 63% of global volume, followed by Europe (16%) and North America (8%).

Despite their dominance, Chinese ports are not exempt of risks, according to Xu Lin, an analyst at UBS Securities, trade frictions between the United States and China and additional tariffs have forced an adjustment of shipping times. The same analyst states that the effects will be seen in 2019 and that Chinese ports should seek more sustainable growth by improving their administration and services offered and by seeking consolidation.

Recent decades have also seen the emergence of the United Arab Emirates as a port operator. The Economist highlights DP World, one of the largest shipping companies, that runs operations in 45 countries, in places like London, Rotterdam and since the 90s, in the horn of Africa. The directors believe that the region from Sudan to Somalia needs between 10 and 12 ports; it currently only has half that number.

Europe in turn, could recover importance. According to Bruno Bobone, Chairman of the Portuguese Chamber of Commerce and Industry and Chairman of the Board of Directors of the Pinto Basto Group (family business the leads the Portuguese shipping services sector), Portugal has all the potential to once again become a key player in the sector. In the event of the application to extend the outer limit of its continental shelf prospering, Portuguese territorial waters would reach the size of India. Portugal is at the center of a community of nine Portuguese-speaking countries with almost 300 million consumers distributed over Europe, South America, Asia and Africa and it has the possibility of connecting the economic potential of these countries with other geographies.

At the end of the day, it may not be a question of which countries or regions will control shipping trade, but rather which operating companies control it. This could imply that a small number of companies decide the rate at which innovations and efficiencies are rolled out in handling ports. Technology has the potential to change even the most traditional industries, and it is difficult to predict how the availability and use of technologies like autonomous ships, the extended use of drones, big data and even blockchain applications will end up shaping supply, demand and the decisions that exporters, importers, port operators and shipping lines take in the future.

The Economist, The UAE is scrambling to control ports in Africa, 19 July 2018