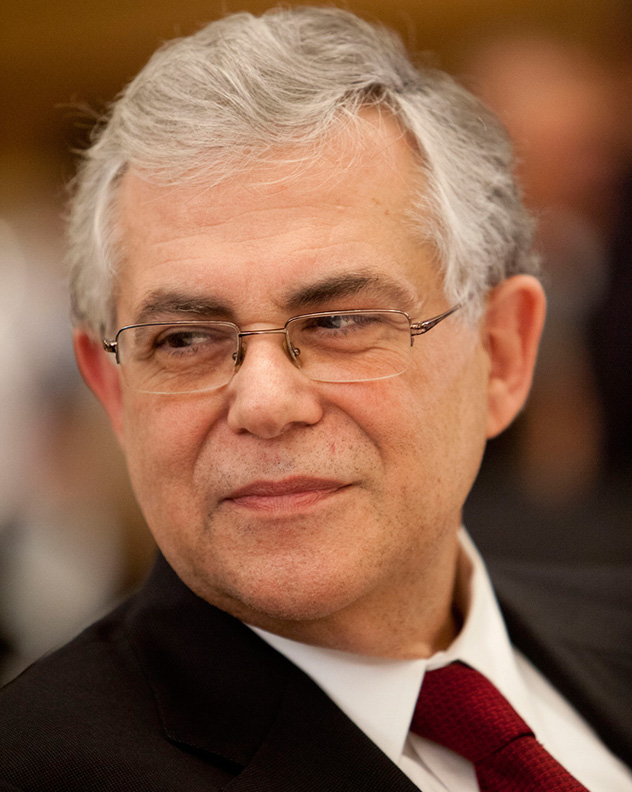 Lucas Demetrios Papademos was the Prime Minister of Greece from 2011 to 2012, leading a government of national unity in the wake of the Greek debt crisis.

He was previously the Governor of the Bank of Greece from 1994 to 2002, before leaving to become vice president of the European Central Bank from 2002 to 2010. He also spent time as a Visiting Professor of Public Policy at the Kennedy School of Government at Harvard University and is a Senior Fellow at the Center for Financial Studies at the University of Frankfurt.

Papademos was first proposed as a potential caretaker Prime Minister of Greece in early November 2011, after Prime Minister George Papandreou offered to resign and allow a provisional coalition government to deal with the major political turmoil caused by the country's debt crisis.

Lucas Papademos set two conditions upon which he would accept the offer of being prime minister of this provisional government. The first was that the new government would not have a very restricted life span as New Democracy had demanded, and the second was that political figures from both New Democracy and the Panhellenic Socialist Movement (PASOK) would participate in the government. Both of these were initially vetoed by New Democracy, but after several days of negotiations they relented and accepted Papademos' demands. This enabled Papademos to form a government made up of PASOK and New Democracy, with the support of the far-right Popular Orthodox Rally.

After a week of political turmoil and negotiations between parties triggered by Papandreou's resignation, Papademos was sworn in as Prime Minister of Greece on 11 November 2011, unveiling his provisional Cabinet shortly afterwards. The other two parliamentary parties, the Communist Party and the Coalition of the Radical Left (SYRIZA), had refused Papandreou's invitation to participate in the government. The provisional government also marks the first time that the far-right has played a part in any Greek government since the fall of the military junta in 1974.

Papademos stated that his government's primary task would be to facilitate the financial bailout from the European Union -which was provided on the condition that severe budget austerity be implemented- and to lead the country until elections could be held. Papademos also stated that his sole priority as Prime Minister would be to try and keep Greece within the Eurozone.

In January 2012, Papademos warned that workers would have to accept substantial cuts in their income in order for a default to be avoided. He also told business and union leaders that the "troika" —the European Union, the International Monetary Fund and the ECB— was looking for Greece to take steps to open up so-called closed professions, as well as adjustments to the minimum wage, abolition of Christmas and summer vacation bonuses and automatic wage increases. Papademos also declared in January that his provisional government would last until at least April, instead of February as was originally planned, so that further austerity measures could be implemented before an election.

In late April 2012, Papademos announced that he would ask President Karolos Papoulias to dissolve the Hellenic Parliament, paving the way for a general election to be held on 6 May 2012. Papademos had intended to stand down shortly after this election, but it resulted in a hung parliament. Subsequently New Democracy, PASOK, and the anti-austerity SYRIZA - which had jumped into second place - attempted to form a government, but all were unsuccessful. Emergency negotiations to attempt to avoid a return to the polls took place on 13 May, but were inconclusive. On the same day, Papademos wrote to President Papoulias to inform him that the Ministry of Finance could only afford to pay salaries until the end of June, and that the need for Greece to recapitalise her liquid assets was "urgent". Negotiations in the aftermath of the election were unable to produce a government and Greece will be forced to have a second general election, which will take place on 17 June 2012. In the wake of the announcement of the election Papademos stepped down, proposing Panagiotis Pikrammenos - a judge and the President of the Council of State - to replace him as caretaker Prime Minister until a permanent government can be formed.

Career as an economist

In 1975, he worked with Franco Modigliani on the NAIRU concept. He engaged in a career in academia, teaching economics at Columbia University from 1975 until 1984, before moving to the University of Athens in 1988, where he remained until 1993.

His work as an economist began in 1980, when he was appointed Senior Economist at the Federal Reserve Bank of Boston. He joined the Bank of Greece in 1985 as its Chief Economist, rising to the rank of Deputy Governor in 1993, and finally Governor in 1994. During his time as Governor of the national bank, Papademos was involved in Greece's transition from the drachma to the euro as its national currency.

After leaving the Bank of Greece in 2002, Papademos became the Vice President to Wim Duisenberg, and then Jean-Claude Trichet, at the European Central Bank from 2002 to 2010. In 2010 he left that position to serve as an economic advisor to Greek Prime Minister George Papandreou.

He is a member of the Academy of Athens. He has published numerous articles in the fields of macroeconomic theory, the structure and functioning of financial markets, monetary analysis and policy, theory of chaos as well as on subjects concerning the economic performance, financial stability, financial instability and economic policy in the European Union. He has also delivered addresses on the Greek debt crisis.