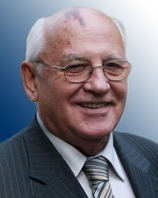 Gorbachev was named a member of the Central Committee of the Communist Party of the Soviet Union in 1971, and he was appointed a party secretary of agriculture in 1978. He became a candidate member of the Politburo in 1979 and a full member in 1980. His primary domestic goal was to resuscitate the stagnant Soviet economy. To this end, he called for rapid technological modernization and increased worker productivity, and he tried to make the cumbersome Soviet bureaucracy more efficient and responsive.

“If what you have done yesterday still looks big to you, you haven't done much today.”

In 1987–88 he proceeded to initiate deeper reforms of the Soviet economic and political system. Under his new policy of glasnost (“openness”), a major cultural thaw took place: freedoms of expression and of information were significantly expanded; the press and broadcasting were allowed unprecedented candour in their reportage and criticism; and the country’s legacy of Stalinist totalitarian rule was eventually completely repudiated by the government.

“The Berlin Wall was a mark of contradictions in the world, and it became a mark of radical changes in the world which touched the majority of humankind... But the way towards abolishing it was long and painful.”

Under Gorbachev’s policy of perestroika (“restructuring”), the first modest attempts to democratize the Soviet political system were undertaken; multicandidate contests and the secret ballot were introduced in some elections to party and government posts.

In 1989 he was elected chairman of this Supreme Soviet and thereby retained the national presidency. Gorbachev was the single most important initiator of a series of events in late 1989 and 1990 that transformed the political fabric of Europe and marked the beginning of the end of the Cold War.

Throughout 1989 he had seized every opportunity to voice his support for reformist communists in the Soviet-bloc countries of eastern Europe, and, when communist regimes in those countries collapsed like dominoes late that year, Gorbachev tacitly acquiesced in their fall.

He has remained active in public life, as a speaker and as a member of various global and Russian think tanks. In 2006 he paired with Russian billionaire and former lawmaker Aleksandr Lebedev to purchase nearly half of the independent newspaper Novaya Gazeta, known for its willingness to challenge Kremlin policies. On Sept. 30, 2008, it was announced that Gorbachev and Lebedev were forming a new political party.