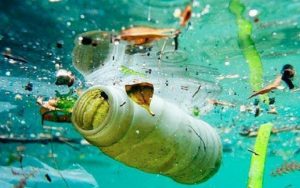 Plastic in the sea: an environmental hazard with no clear solution

A sea full of plastics

Warnings about the effects of climate change have increased in recent years. And a leading current of this new global sensitivity in recent months has been alarm about the effects that the enormous amount of plastics in the sea have for the future of marine species, the oceans and, in general for the planet. “We are facing a planetary crisis (…) we are ruining the ocean eco-system”, claimed Lisa Svensson, the UN director of oceans. Industrial ecologist Roland Geyer of the University of California in Santa Barbara, United States, in an article published in the journal Science Advances, calculated that the total volume of all the plastic produced in the world over the last 70 years, when it was marketed, is 8.3bn tons.

According to the same report, some 6.3bn of this total are waste, and 79% of it is in landfills or in the natural environment. It is difficult to calculate exactly how much is in the seas, although the amount is assumed to be unsustainable. An estimated 10 million tons of plastic end up in the sea each year. It has even led to diplomatic incidents between countries, such as the one between Guatemala and Honduras over the plastic in the sea from the Motagua River at its mouth in Honduras after flowing through Guatemala. Both countries blame the other without agreeing on how to resolve the effects and the causes of the problem. The basins of the most important rivers in the world, which is the case of the Nile and the Niger, and several smaller rivers in Asia, are used as rubbish dumps that flow into the sea.

Plastic in the sea: lasting effects

Plastic is a problem because it is not bio-degradable; it is designed to last a long time. This fact, together with its wide-spread domestic and commercial use in the form of utensils and bags, has multiplied its use exponentially. At this rate, it is estimated that by 2050, there will be 12bn tons in rubbish dumps and in the environment. According to an article in the journal Science, the size of the dead zones, or zones without any oxygen in the oceans has increased four-fold since the mid-20th century because of the effects of plastics, while the zones with very little oxygen close to the coasts has multiplied 10-fold. This situation could cause a mass extinction of species, which poses a double threat: on the one hand, it could put an end to a way of life and feeding habits in many areas of the planet, and, moreover, affect the capacity of the oceans to fix CO2.

The greatest problem on the coasts are the nutrients used in agriculture that reach the ocean, such as phosphorous from fertilizers and compost for plants, which run off into rivers and form there, to the ocean. Once in the ocean, they trigger an exponential growth of algae that, when they die and decompose, absorb enormous amounts of oxygen. Another study from the journal Science in 2015 that analyzed 192 coastal countries that contribute to the increase in oceanic plastic waste drew the conclusion that 13 of the 20 leading contributors to plastic in the sea were Asian. China was the worst manager of its waste and the United States was among the top 20 countries. Furthermore, America is the country that generates the most waste per person in the world.

What solutions are posed?

Although the blame game is the usual response, and despite the fact that the United States and China are the main culprits due to the weight of their economies, the European Union is the party that has taken the problem most seriously. That is why it has proposed a set of integral solutions that tackle all aspects of the problem, along with the under-lying causes. According to the European Commission, the annual cost of cleaning its 50,000 kilometers of beaches and coasts is between €194m and €630m, which has forced them to legislate more actively. Plastic waste entails damages and losses for the fisheries sector in the EU estimated at €61.7m per year, 1 % of the revenues of the industry’s fleet according to the latest consolidated data, from 2010.

The directive that is currently being prepared will ban plastic cotton buds, cutlery, plates, straws, drinks stirrers and balloon sticks, among other products. It is aimed at the top 10 single-use plastic products found on beaches and lost, abandoned or discarded fishing gear. All of this accounts for 70 % of the rubbish found on beaches and coasts and the directive expects member countries to collect 90% of single use plastic bottles, the most polluting plastic product.

Consideration is also being given to increasing taxes on plastic products, awareness-raising campaigns targeting producers and consumers and promoting the circular economy, re-cycling and a permanent fight against excessive wrapping and packaging.

These are root-cause solutions used by the European Union to explicitly declare its intention to lead a global campaign against single-use plastics to prevent them reaching the sea. The doubt lies in how the United States and China will react to the measures against plastic in the sea.

Given that the Asian giant has taken climate change far more seriously and that it has presented ambitious plans for reducing greenhouse gas emissions, it will probably be receptive to these restrictive plastic policies. The United State on the other hand, which has withdrawn from the Paris Accord on climate change, does not seem to be inclined to follow in the steps of the Europeans. Scientists are clear on this: it will be of no use if a phenomenon like plastic in the sea is not tackled globally and by everybody concerned.

The Known Unknowns of Plastic Pollution. The Economist, 3 March 2018

E.U. Proposes Ban on Some Plastic Items to Reduce Marine Pollution. The New York Times, 28 May 2018

Clive Clookson, The Problem with Plastic. Financial Times, 24 May 2018

Portada » Tendencias Globales » Plastic in the sea: an environmental hazard with no clear solution